What is the Ocean Hiding?

Hello idiots. Are you ready to learn something today? If you’re anything like me, you’ve spend most of your life on what we call ‘the land.’ There are very few people born and raised in the ocean, which I find to be a bit of a shame. It means there’s a lot we don’t know about that little blue world.

Well luckily, I’m here to educate your pathetic brains and convince you to open your feeble minds to some pretty shocking facts and/or made up theories.

Here Are Some Facts About the Ocean:

All this has led me to believe one thing – the ocean is hiding something from us. And I won’t stand for it any longer. Below I have laid out my 8 most likely scenarios for the what our precious ‘Ocean’ is selfishly keeping to itself.

8. More Shrimp Than We Know What to Do With

I love shrimp cocktail more than pretty much anything in the world. But it’s also expensive as all heck so I can only have it at dinner parties or work functions. Basic laws of supply and demand dictate that this is because there’s not that much shrimp.

HOWEVER, think about this:

My theory – shrimp used to rule the world until humans invented the fishing rod and realized that these little shits taste delicious in some cocktail sauce or on a savory taco. We hunted them to the brink of extinction, forcing them to retreat to the depths of the ocean, where they now live in harmony with squids and hide from us like cowards.

How many shrimp are there actually in the ocean? Probably like 5 billion or something. I have no idea what a cubic kilometer is so it’s hard to do the math.

Likelihood This is True: 50%

I just realized that popcorn shrimp is pretty cheap at Popeyes so maybe there is actually a lot more shrimp than I realized. This entire theory was based on shrimp cocktail prices.

Easily the hottest pilot ever, in 1937 she attempted to become the first woman to fly around the world. She made it pretty far until she mysteriously disappeared somewhere near the Pacific Ocean. Some people say she “Captured by the Japanese” or “Crashed into a mountain and died.” Please. You sheep.

It’s pretty obvious that she safely landed in the ocean, threw her radio into the water so no one could find her and transformed her plane into a submarine house, where she still lives today. She spent her remaining years learning to play the harp and practicing holding her breath as long as she could. Her record was over 2 minutes – take that Chriss Angel.

This is definitely what happened, but I’m not sure if she’s still alive. She’d be like 120 by now. Then again, that’s in land years and you age slower in the ocean. We’ll never know.

7. $2.6 Billion of Portuegese Gold from the Flor de la Mar

For those who don’t know, Portugal used to be dope as fuck in the 1500s after they basically invented boats and killing indigenous for gold. They had like a million ships and along with the Spanish, discovered most of the world even though it already existed.

Their biggest boat ever was called the Flor de la Mar (loosely translated to Flor of the Mar) and its greatest conquest was lead by a dude named Albuquerque, named after the city in New Mexico. He and his sailors fucked up this village in the Malaysian peninsula called Malacca which was a giant international hub filled with riches and treasure (similar to modern day Secaucus, NJ.) They took everything from the sultan’s palace, including “more than sixty tons of gold booty in the form of animals, birds, gilded furniture ingots and coinage.” In case you didn’t know, sultans are rich as fuck.

Unfortunately, the ship was wrecked during a storm and all the riches were gone forever. Every year there are serious attempts to retrieve the treasure, but our asshole friend “The Ocean” just won’t give it up.

Likelihood This Is True: 25%

The only survivor from the wreck was Albuquerque himself, which is how we know what was on the ship. He’s pretty much 100% lying. “Oh yeah, you guys should’ve seen this ship that crashed. Tons of gold and birds and shit.” Stfu Albuquerue we’re trying to have paella man.

If you haven’t seen Finding Nemo, please close this page, shut your laptop, and run off the closest roof at full speed. Now that that’s out of the way, let’s talk child abandonment.

In the opening scene of the film, we’re introduced to Marlin, his wife Coral, and their 700 incubating eggs. Disaster strikes and we’re led to believe that a vicious baracuda murdered all the eggs, leaving only Nemo.

Nice try Pixar. It’s obvious that Coral has desperately wanted to leave Marlin for years and hired the baracuda to execute her plot. Marlin’s OCD and constant paranoia was a constant source of stress and anxiety for Coral and she didn’t want to expose her future children to that life. She’d filed for divorce the year prior, but fish law generally favors the father fish, so it was not granted. She had no choice and did what any mother would do – protect her children at all cost.

Where are Carol and the children now? They live comfortably in the Coral Reef, but on the other side of town. Being a single mother is hard, but Coral works 3 jobs and makes ends meet. She sometimes thinks about the gimp son that she left behind, but in her heart she knows that he was a little bitch and would have slowed her down anyways.

I’m only discussing this because it is 100% fact. Dolphins are a majestic beast. They are very smart, and the evolution of their larger brains is surprisingly similar to humans.They also, like humans, engage in sexual activity for pleasure and have been studied engaging in bisexuality and homosexuality. How evolved! Wrong. They are vicious rapists.

There are many instances of male dolphins being sexually aggressing towards female divers or tourists.  Scientists got so concerned they set up a “Dolphin Cave,” where they observed 15-20 male dolphins and their behavior with ‘decoy divers’ who resemble humans. I’ll avoid some of the specifics (its a family blog) but yeah it was not cool.

I’m sorry to be graphic. But I just want you to be careful the next time you’re at SeaWorld. Arouse a dolphin and suffer the consequences.

There is the case of one Malcom Brenner, who claims he had a real-life love affair with a dolphin named Dolly back in 1970, when he was in his early 20s. Brenner believes that the dolphin courted him and they were truly in love. So yes, sometimes it is consensual.

I am the world’s foremost authority on seaweed. For all of you who don’t know, I have a second wildly popular Instagram account known as “SeeMeSeaweed.” It is a hub for all lovers of seaweed, which is one of the most delicious snacks known to man. I am trying to become an influencer so please send me any and all seaweed.

A few facts about seaweed for those who are afraid to click a link:

I mean seaweed exists. Did you not know that? Follow @SeeMeSeaweed for more.

3. An Advanced Society of Intelligent Humans

Have you ever heard of the aquatic ape hypothesis? Probably not, because you’re an idiot. The basic theory is that a branch of apes was forced by competition on the land to hunt for food in the water.  They eventually survived and moved onto the land, but brought characteristics with them like hairlessness and partially webbed feet/hands that exist in humans today. Now we can do shit like swim butterfly and get pruney when we’re in the hot tub for too long.

Well think about this – what if some of those apes decided they really liked the water and didn’t want to go to the land? What if they were hunted by the land boys and continued to evolve deeper and deeper into the ocean? What if they retreated further and further into the depths of the ocean and each generation forgot that life above the water even existed? Soon, they’d build cities, railroads and Applebee’s Neighborhood Bar and Grills 50,000 feet under the sea level without even knowing we were doing the same thing ABOVE the water. Humans might rule both the land AND the sea!

Likelihood This is True: 71%

Admittedly, I have an incredibly rudimentary understanding of evolution, but still. This would be pretty cool.

2. An Advanced Society of Intelligent Octopuses

I cannot believe that we share a world with Octopuses. They have 8 legs, 3 hearts and 9 BRAINS. Plus they can literally camoufloge like a chameleon and can open cans with their tentacles. They can also edit their own genes. Lol wut.

They are also so fucking smart it’s not even funny. They can use tools, form social groups, and most importantly, they have distinct personalities. You know, like humans. I read this article about a researcher who spent years with Octopuses and I honestly wept.

I like to imagine a world under the ocean where self-aware, intelligent octopuses have formed a society with civil rights, culture and a thriving economy. Maybe they sell 8 legged pants to each other. Maybe clams are currency. Maybe the more suction cups you have on your tentacles, the cooler you are. Maybe it’s the opposite. We’ll never know.

Likelihood This is True: 35%

If they’re so smart, then why would they let us eat them? Fair point.

Look at what was found under the ocean, according to this one website I can’t find anymore: 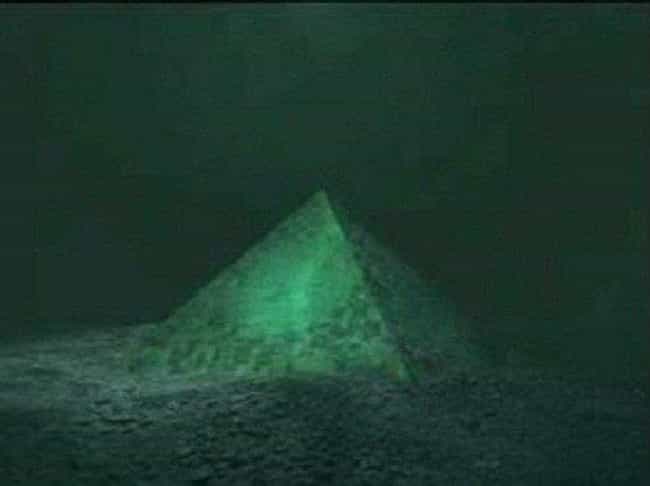 Yep. That’s a pyramid 3x the size of the Pyramids of Giza. Wonder how that got there?

This is one of almost a million crashed UFOs found underwater. NASA won’t admit the aliens are underwater because that means they’ve failed and space is stupid.

So yeah. It’s pretty obvious the aliens have set up underwater bases at strategic locations across the entire globe. Anyone who thinks differently is a piece of shit. Sorry.

Likelihood This is True: 1 million

One thought on “What is the Ocean Hiding?”