What Your Underage Drink Order Says About You 

*Editor’s Note: This article comes from the content dream team known as Study Party Die, the two headed monster of Sam the Intern and Intern Tavi. Check out more of their college related content here.

We want to start this article off by saying that we in no way, 100% do not condone underage drinking. Let the record show that until we recently turned 21, we had never touched a drop of alcohol. We promise. This article will explore what a drink order might say about the person who orders it…when they are under 21. The reality is, that underage college students do drink and they do go out to bars. Legally, we recognize that this is outrageous and dangerous–we would never! But comically, this is a hilarious sight because you can witness freshman 18-year-olds trying to fit in at the local university bars. In the process, they end up ordering a wide range of drinks–ranging from acceptable to all the way ridiculous, drinking something that no real adult would ever touch.

If you’re in college you’ve certainly had an abundance of Natural Light, Bud Light, and Busch Light. They’re great and have their place when you’re binge drinking on a Saturday. You can drink 10 and not be too full nor too shitfaced, given they are borderline water.

If you’re out at a bar or dinner and order a light beer, though, you must be a real boring fellow.

You drink those every other time you drink, why not change it up a bit, pal? Plus, if you’re underaged asking for natty at a bar they’ll sniff you out quickly. Nothing reeks of college freshmen more than that. Save the light beer for day drinking, beer games, and sporting events. Or, if you’re really poor, they tend to be the cheapest thing a bar has. But should you really be going out if you can only afford one tall boy?

The long-running stereotype of IPA drinkers being sacks of shit is by and large true. Over here we love a good IPA too, but we definitely don’t feel the need to talk about it constantly. That’s the issue with underage children ordering these beers. They’ll pretend to know something about IPA’s, their hops, or microbrewing (whatever the fuck that is) and end up alerting everyone to the underaged nature of their purchase. Watching a teenager order an “eepuh” and cringe at each sip they take will never not be funny, but ends up being wholly not worth it for them. $10 for the worst beer they’ve ever tasted…would have been better to be boring and have a silver bullet.

Ordering any of these at a bar is typical and will definitely tell the people around you, “I’m 19 and I don’t care who knows it!”

Just because a drink has an energy drink in it or is mixed with four different liquors doesn’t mean that it’s worth drinking. In fact, it probably means that it tastes like rubbing alcohol mixed with cough medicine. But that doesn’t stop college students. Walking into any college bar, you’re bound to see a couple of these drinks rear their nasty heads. If you want to lay low, steer clear of any of these mixed drinks. Rule of thumb: if it’s neon blue, don’t drink it, idiot. 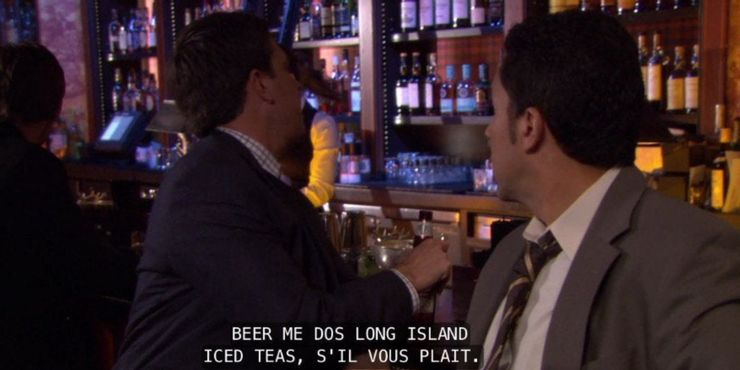 Shots and underage drinkers go hand and hand. Who would Michelangelo be without his paintbrush? Who would a drunk sorority girl be without her New Amsterdam shots? Luckily, these are two questions that we never have to answer.

If you’re underage and ordering shots, chances are you’re a pretty fun person to go out with…but you’re a liability.

No, you most likely won’t get noticed ordering shots for you and your friends–adults drink shots, too. But adults don’t drink only shots. There’s a reason that people mix liquor with other things; you know you can drink those drinks, right? Maybe try ordering a mixed drink or a beer, or a water. Come to think of it, you probably need a water.

You just ordered wine at the bar? You’re trying too hard.

Yes, it’s true that people do drink wine at the bar, but are you really ready to be walking around socializing with a glass of red in your hand? Maybe rethink that one. Ditch the wine stains and drink something that you can pronounce. No, it isn’t a “cab-er-net.” You are just trying too hard.

At the end of the day, it matters less what you’re drinking and more that you don’t get your fake ID taken and thrown out of the bar. A lot of this can tie back to what you’re ordering and how you’re ordering it. Confidence is 90% of the battle, so don’t be scared using the ID that says you’re 24 and from a state a thousand miles away. Or, you can bypass all of this by sneaking a flask in your pocket and taking heavy swigs in the bathroom. To each his own; c’est la vie, etc.

Our Intern Answer Our Questions About College Life

The Content King: How Hitting 100,000 Followers Will Change Him Forever